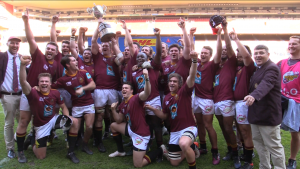 This past Saturday saw a display of club rugby with ten teams in action and several fans enjoying the atmosphere.

After a full league season and play offs the top two teams, after the knockout stages were invited to compete for the league titles at Newlands.

In Super League C it was a 35-28 win for unbeaten Macassar as they came out on top of a closely contest match against Busy Bees. Both these teams are now promoted to Super League B.

In Super League B, the finals were contest between Paarl and former Super League A outfit Primrose, the former eventually walking away with a 26-17 victory, thereby taking the title. Both these teams are now promoted to Super League A.

Super League A saw Stellenbosch take on Durbell in a very physical encounter, with this first half equally contested. It was however the students who stepped up the pace in the second half to walk away with a 51 -27 win and securing the season title yet again.

Having beaten False Bay at City Park last week, Durbell have secured their spot in the 2019 Gold Cup.

The day started with the divisional third and fourth place play offs to see who would qualify to play in the promotion relegation matches this coming week.

Super League C’s fourth place Goodwood scored a narrow 41-40 win over Kylemore and will now go on to face Pniel Villagers who ended thirteenth on the log in Super League B.