Club News This coming weekend will see the Super League A, B and C winners determined at Newlands.
Club News 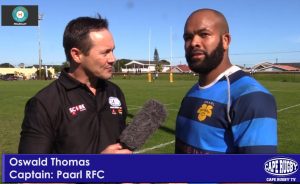 This coming weekend will see the Super League A, B and C winners determined at Newlands.

After this past weekend’s semi-finals at City Park we go into the finals with some big games on the cards. Super League A was contested between Uni-Mil and Maties, and even though Uni-Mil stood up to the challenge the students were just to strong winning 50 -32.

The second Semi-Final went down to the wire as Durbell scored a narrow 19-12 win over False Bay. This match was not only a battle for the finals, but also the determination of the Gold Cup entrants, which will now see Durbell compete as the highest ranked open club.

Durbell will now face Stellenbosch in the finals at Newlands on Saturday, with Kick off at 15:30.

The Super League B semi-finals saw a 50-27 win for Paarl over Bellville and a 36 – 24 win for Primrose over Helderberg. Primrose will be very happy with this result having gone into the match with the stats slightly in favour of the log leaders. (Kick off 14:00 – DHL Newlands)

In addition to the days results which will now see Primrose up against Paarl in the final to determine the league winners, both these teams will now be promoted to Super League A.
Bellville will now play off against Helderberg to see who ends in third place and go on to face NTK in the SLA promotion/relegation match. (Kick off 11:10 – DHL Newlands)
In Super League C, Macassar once again showed why they are unbeaten this year with a 46-14 win over Kylemore, while Busy Bees scored a 27-21 win over Goodwood. Macassar and Busy Bees will now be promoted to Super League B and face each other at Newlands to determine the league winners.
Goodwood and Kylemore will play off to see who ends in third and go on to face Pniel Villager in a SLB promotion/relegation play off. (Kick off 09:45 – DHL Newlands)
The promotion league is still firing on all cylinders with some big matches having been played this weekend past. Having come from three different divisions many of these teams have not played each other before, but we did have one rival clash being Raithby Universals and Van Der Stel-Evergreens with Raithby taking the win 34-10.
Morning Star retained their good form with a 29-23 win over Police. Blue Stars, Masiphumele and Morning Star lead the log and will be keen to retain these positions for promotion to Super League C.
This week will see some midweek games as Van Der Stel – Evergereens host Blue Stars, while Silvertree travel to Retreat.
In the Paarl Top 6 we saw a 56 -17 win for Allandale over Young Gardens, this result now push them to the top of the log over former leaders Riverstones.
In the Paarl Bottom 6 Faure, who has come across from the Simonsberg League scored an impressive 25-0 win over regular Paarl League members Paarl Rangers.