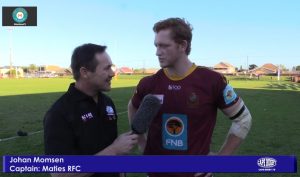 The Super League A has now completed the first round and we have our Top 6 to go into the Super League Championships. The final match we were waiting for was UCT vs Milnerton with the win and qualification going 31-24 to Uni-Mil.
The guaranteed semi-final is now allocated to Stellenbosch and False Bay, and the remaining four spots secured by Durbell, Uni-Mil, Victorians and Hamiltons. This weekend Uni-Mil host Hamiltons at Theo Marais Park in the first of the knockouts while Durbell host Victorians. Both games will kick off at 15h00.
On the other side of the table it’s now confirmed that St Georges and Belhar will be relegated, while NTK, who were in with a last chance will play against the third place in Super League B to determine promotion and relegation. This comes after UWC beat NTK 39-29.
The Top 6 in Super League B is now also on the verge of finality, with the only last possible change being in position six. Kuilsriver currently occupy this position after their 42-25 loss at home to Bellville. Should Hamlets beat Pniel Villagers with more that 46 points this weekend, then they could dislodge Kuilsriver and slide into the Top 6 on points difference.
Only Helderberg has secured the guaranteed semi-final and the race is open between four teams to secure second spot. Paarl, Franshoek, Primrose and Bellville still have one match in hand this weekend. There is thus no surprise that many call Super League B the league of death.
At the bottom of the log there still has some wiggle room as Hands and Hearts and All Saints sit in positions thirteen and fourteen respectively, while Kraaifontein could also rescue themselves if the beat Vineyards by 44 points and if All Saints don’t win. This permutation could also mean a possible drop to third place for Pniel Villagers.
Unbeaten Macassar have secured their semi final spot after their 43-28 win over Blue Jets in Super League C. Busy Bees still have one game in hand but cannot be caught for second spot and their coaches might consider resting their players when they host Kylemore at Langa this weekend.
Unlike Super League A and B there are no play offs for relegation in this league and this now sees Violets, Sir Lowrians and Young Stars being relegated to the regional leagues.
The Promotion League has already seen some exciting action including this week’s mid-week games. After three rounds we now see Blue Starts take the lead on the log after their 41-10 win over Retreat. Interesting results in the past seven days includes Masiphumelele’s 26-24 loss to Police and Morning Star going down to Blue Stars. Hot on their heels is Allandale after beating Young Standards 33-17.
In the Paarl League Top 6 we see Riverstones taking the early lead with two five pointers and their most recent 28-19 win over Young Gardens.
We now have a full calendar of major events over the next two months, starting with the club finals at Newlands on 6 October. The launch of the Score WPRFU Sevens on the 9th of October at the Southern Sun in Newlands.
The Score WPRFU Club sevens will run over a four week period this year starting on 20 October at the CPUT through to 10 November.
Additionally it’s that time of year when we bestow accolades on our members at the end of year awards banquet. This year, as before, the event will be held on 16 October at the Cape Sun in Cape Town.
This week also saw the sad loss of a beloved rugby son, Kyle Barnes from Goodwood Rugby club, who passed away after an injury he suffered in their 1st team league match against Strand Rugby club last Saturday. We will keep you updated on funeral arrangements as it become available and ask that you keep his family, friends and colleagues at Goodwood Rugby in your prayers.
WP Rugby also lost one of our past EXCO members, Mr Benny Alexander who served the Union EXCO from 2007 to 2011. We extend our sincere condolences to his family and friends.
Our WP Senior women’s league fixture that could be played last week will now take place tomorrow at Brookside when they take on EP Women’s. The match will kick off at 12 noon and will be a curtain raiser to the DHL WP U19 clash with the Cell C Sharks U19, that kicks off at 14h00 at Brookside.
Currie Cup action returns to DHL Newlands stadium tomorrow when DHL Western Province U21 host the Cell C Sharks U21 kicking off at 17h00.
John Dobson’s Currie Cup team host the Tafel Lager Griquas in the main game at 19h30 and the coach will be smarting as he welcomes back 4 Springboks for this clash.